Richard Tuttle was discussing his work with Richard Shiff (Professor of Modern and Contemporary Art at the University of Texas) at the Royal Academy of Arts. 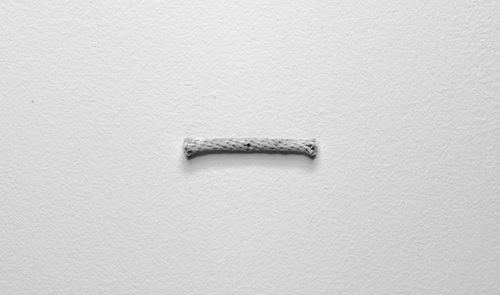 In a conversation years, ago Tuttle had not recognised his own work from Shiff’s description. This piece had been widely documented, but it turned out that the photograph was taken when the piece had been installed by technicians in London (I think it was at Whitechapel Gallery). After Shiff’s ‘wrong’ description of the piece, Tuttle made the effort to have the piece re-documented after he had installed it. Tuttle felt that the rope in the first piece was just too perfect… un-worn and therefor didn’t do what he wanted it to do, although the 3inch rope was hung 3inches above the floor with three nails, as he had stipulated.

Other quick notes of Tuttles statements from the lecture that I uncovered in my sketch book;

That evening in January, I had made my way to the RA to listen to an established artist talking about his work. Walking away at the end of the evening I was happy to have been introduced to Professor Richard Shiff. His questions were informed and engaging, creating a ballroom that any artist would be happy to dance in.

I am a visual artist with a practice that explores how conceptual deliberations and the hand made can co-exist. Check my website for documentation of artworks.
View all posts by Andrea Jespersen →